A Journey With Many Turns

I was born in rural Oklahoma in 1971, right after Thanksgiving.  I am named after my grandfather, John, and my father, Jeffrey (which is my middle name.) A baby sister, Erin, came along a few years later.  It was utter bliss for a young boy; plenty of acres to explore and play on.  We learned the values of hard work, too – there were always lots of chores to do which consumed much of our weekends.  But we had lots of dogs, lots of toys, and even a splendid custom designed treehouse that grandpa and dad built from scratch.  Our grandparents lived down the hill from us, which added even more joy to our lives.  We even grew our own food…I have many fond memories snapping green beans, digging and washing potatoes, and picking basket after basket of plump, delicious tomatoes.  I still remember the technique we learned for pulling up onions without busting off the tops!

We also learned about faith.  From a very young age, we were taught that there was a God, He was mighty and loving, and that he made everything around us.  We said grace before every meal and knelt by our beds for prayers every night.  I still vividly remember camping out alone in the back pasture and staring up at the Milky Way at night.  I think that was the first time I really connected with God.  I was overwhelmed by the idea of existence.  My Father in heaven was whispering to my little heart even then.

We attended Sunday school at the Presbyterian church in town, from nursery age until I was in about 5thgrade.  My understanding is that a new pastor came in, and sadly a rift of some kind formed.  In any event, we stopped attending church at that point.  Fortunately, I knew who the Lord Jesus was by then, and had a firm understanding of the order of things.  He was the Creator, and I was His creature.  He was the Shepherd, I was a sheep.  I am a sinner, but He shed His innocent blood for me.  So life went merrily on…until…

In 1985, my grandparents retired and moved away to Texas, and we in turn sold our share of the family homestead and moved to the “suburbs.”  Although our new house was significantly larger and newer than the little old house we grew up in, it was quite a change for a now 14 year old.  Worse still, three years later my parents went through a very painful divorce.  I had just turned 17, my family was in turmoil, and I suddenly found myself in desperate need of a new anchor.  I was deeply involved in Boy Scouts, and would go on to earn the rank of Eagle Scout.  I was also a cadet officer in Air Force Junior ROTC, and was blessed with some wonderful role models within the Corps.  But it wasn’t enough to treat my spiritual wound.  I needed to get back to church.

About this time, my mother had recently begun attending a new church that was very charismatic in practice.  I went with her a few times, but it just wasn’t my cup of tea.  But I knew that I had to get back into a church – one where I could get involved and find belonging.  Since I grew up Presbyterian, I started there – and discovered Heritage Reformed Presbyterian Church about 20 minutes from our home.  Since I was driving by that time, I showed up one Sunday at their leased storefront location.  Pastor Chuck Garriott greeted me with a firm handshake and a massive smile.  That was a turning point in the life of a pretty troubled teen.  I joined their youth group, moved with them into their beautiful new building a short time later, and was surrounded by love, great preaching and teaching, and acceptance.  God was there.  That was also when I really discovered my love for the hymns of the church.

After I graduated from high school in 1990, I entered college at Oklahoma State, but, like many young people, I forgot to take God along, so to speak.  I was still pretty angry – I felt that I had been “ripped-off” and deprived of the warm loving family unit that many of my friends still had.  I also didn’t have the “free ride” through school that I perceived my friends had, either.  I had to work a lot, but I lived irresponsibly, and my grades showed it.  Don’t get me wrong – it was a lot of fun at first.  But four years later, my friends had all graduated, and there I was in Stillwater – alone, out of school on academic probation, and working two jobs to pay rent on my crummy apartment.  I ate a lot of Ranch Style beans and ramen noodles in those days.  I worked at a local pizza place during the day, and was a disc jockey at night at KGFY, the radio station in town.  After I got off the air at midnight, I walked across the street to Murphy’s tavern, drank a pitcher of cheap beer, and walked home half a mile to my apartment.  (My car wasn’t running then, and I couldn’t afford to fix it.) The sidewalk home went right past the beautiful Edmon Low Library on the OSU campus – and each time I saw that majestic building lit up at night, I felt more like a failure.  That was my life, and I was beginning to accept it – I was about to give up and stop trying.  And then one November night, God sent a girl from Tulsa named Jan into Murphy’s – and into my life.  She was the best friend of my college roommate’s girlfriend, and they had come to Stillwater just to hang out.  I’ll never forget the first time I saw her.  It’s one of my most cherished memories.

We stayed up all night talking, and by the morning I was in love.  I soon discovered that she was, too.  She gave me her phone number – wrote it on a Sonic napkin, which I still have – and I finally worked up the nerve to call her.  I explained that I’d love to come see her, but I didn’t have a running car.  I figured that would probably be it for me.  But she made the one-hour drive from Tulsa to see me more times than I can count, and our love deepened.

It turns out that Jan was reared in a solidly Christian home, and had literally grown-up in the local Freewill Baptist church.  She also made it clear that, if we were to have any future together (and if I wanted her parents to “approve” of me) that God was going to be the center of our lives together – period.  She invited me to the church – New Home Freewill Baptist Church – and this time, I was greeted at the door by pastor Roy Dale Smith – “Brother Roy” – with another firm handshake and a massive smile.  I hadn’t darkened the door of a church since high school – and after that service, I realized what I had been needing.  I was home again.  God had reached down and rescued me.  We were married in that little church on May 27, 1995.  Jan also encouraged me to go meet with the Dean at OSU, and arrange a path to get back into school and finish my degree, which I finally did in December 1996.

Jan and I have been married for 26 wonderful and adventuresome years.  We’ve moved quite a bit with her job – 2 years in Broken Arrow (near Tulsa), 12 years in Texas, and now 11 years here in Arizona.  After a brief and not-so-successful stint in computer programming, I returned to radio broadcasting and would end up hosting a morning drive show in Dallas.  When we came to Arizona in 2010, I became a professional actor and started a business narrating audiobooks.  But everywhere we’ve been, we have made God – and His Church – a priority in our lives.  That was our agreement when we married, after all.  We’ve had a few rough spots, like anyone else – but God has been so faithful – so good – to us.  He is truly our Anchor.

About five years ago, I felt God calling me to a place where I could serve in a greater capacity.  The large church we had been attending just didn’t seem to be a good “fit.”  Try as I might, I just couldn’t find a place to serve there.  I had discovered the Anglican way a number of years before through our brother-in-law Father Joel, who is a priest and Rector of a wonderful parish in Ft. Worth.  After a web search, God led me to Christ Anglican Church, and – just like I had done as a 17-year-old – I just showed up, on Ash Wednesday 2017.  Following the Mass, Canon Dart greeted me – with yet another firm handshake and massive smile – and I was home again.  I immediately got involved in music ministry, plugged into the Men’s breakfast, and was eventually asked to join the lay leadership as the new Music Director in late 2018.  Further, when Dr. Dorothy Sanderson moved away, I was asked to complete her term on the Vestry, which I accepted and was subsequently elected to a three-year-term of my own.  And in early 2021, I was appointed by Canon Dart to serve the parish as Senior Warden, giving me even more opportunity to serve God and His people at the parish I’ve grown to love.  And today as I write this, I realize…the journey continues.  Thanks be to God! 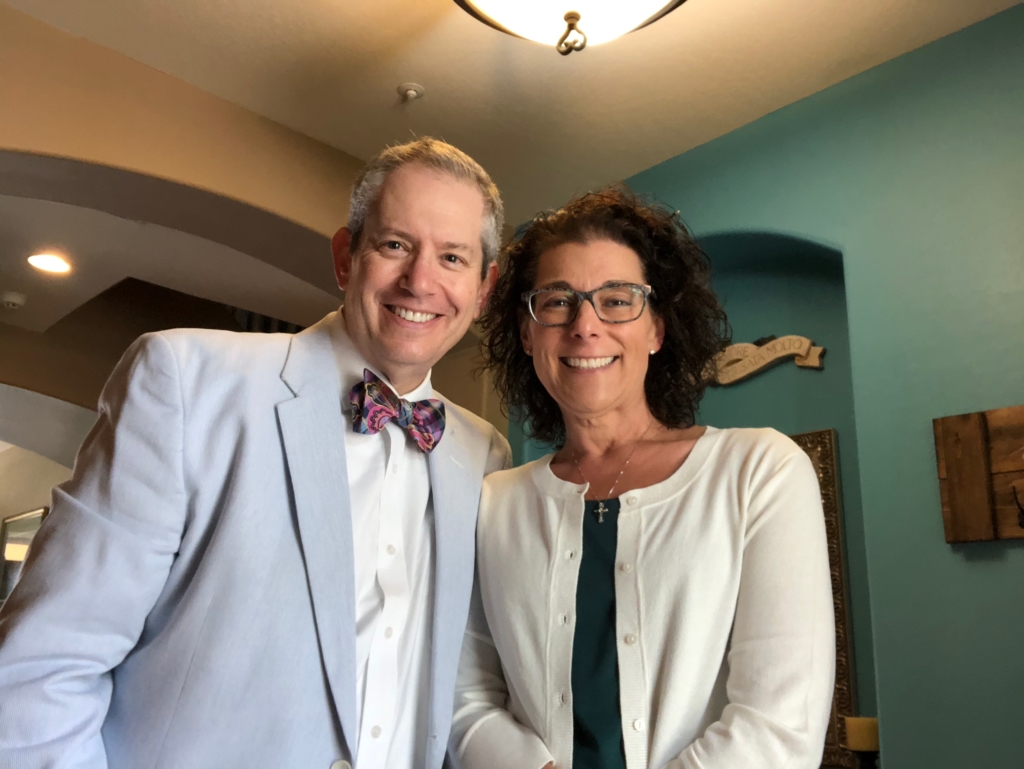 About the Author: Christ Anglican Church

Christ Anglican Church in Carefree, Arizona began as an outreach from the clergy of Saint Nicholas Anglican Church in Scottsdale, Arizona in July of 1997. We are a founding member of the Diocese of the Southwestern States in the Anglican Province of Christ the King. For the love of God and to glorify His Son Jesus Christ, the charter members of Christ Church Parish gave sacrificially to buy property, erect an altar and build a Church that was consecrated on the Feast of Christ the King in 1999. This is the sacred ground where the faithful regularly proclaim God’s truth through Catholic order as it is embodied in the historic Book of Common Prayer, where they hear the Gospel and receive the Holy Sacraments.